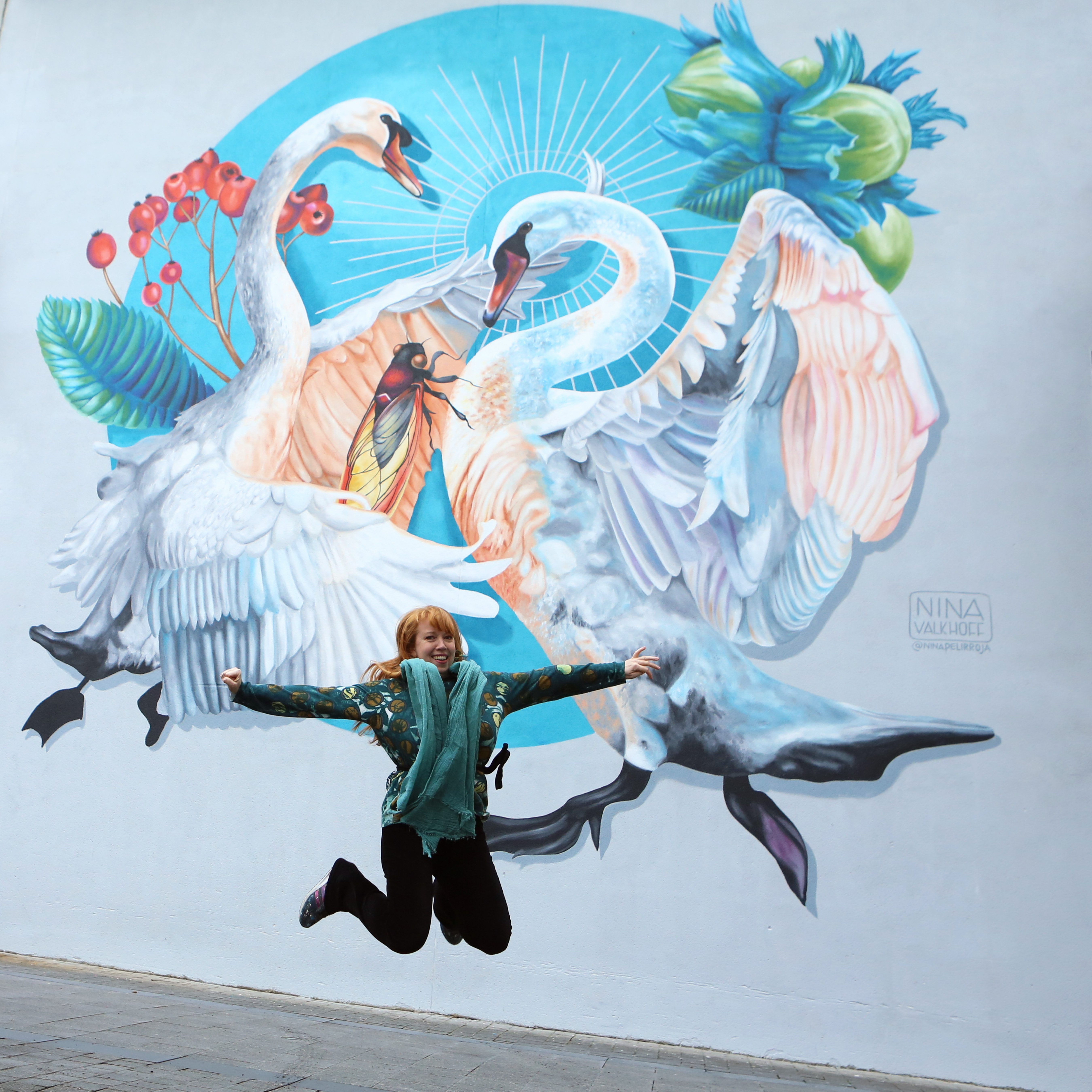 Droichead Art Centre, Love Drogheda BIDs and Louth County Council are delighted that Nina Valkhoff’s contribution to the DRAWDA Urban Art Trail, based on the mythological figure of Étaín has been shortlisted in Street Art Cities “Best Mural of 2022” award. Nina’s mural has helped bring a new energy to Meatmarket Lane and is one of six large-scale murals that make up the DRAWDA project, all depicting Irish Mythological stories and figures.

Étaín, one of Irelands most beautiful woman, was cursed and transformed into a scarlet fly, as seen in the centre of Nina’s mural. Nina’s composition conveys protection and love, elements that can be found in the story of Étaín.

Droichead Arts Centre director, Collette Farrell noted; “Large-scale murals have a real impact as cities look for interesting ways to include and integrate art in public spaces. Nina’s “Étaín” for the DRAWDA project has been shortlisted for the Best of 2022 awards among the most prominent large-scale muralists in the world and we could not be more delighted for her.

Her piece showcases the tenderness, protection, and magic in Étaín’s story and with the other six murals in the DRAWDA project and the accompanying audio trail, helps to situate Irish Mythology in Drogheda and its environs. The DRAWDA project is a legacy project that we aim to further develop and preserve, working with local, national, and international artists, like Nina, who bring their talents and unique perspective to our local stories.”

Love Drogheda BIDS CEO, Trevor Connolly stated that “We are so pleased with the news that Nina’s contribution to the DRAWDA project has been shortlisted. This project has helped enliven some lesser visited spaces in Drogheda and has brought colour and energy back to the town.

We wish Nina every success on her nomination for what is an inspirational piece. Overall, it has been a pleasure to work with so many talented artists, Droichead Arts Centre, the Curators, Louth County Council and property owners to showcase the Irish Mythology stories closely associated with Drogheda and the impact the DRAWDA project has had on the town.

We would encourage all locals to visit Nina’s mural on Meatmarket Lane, as well as the other five in the trail and most importantly to vote for Nina’s piece via the Street Art Cities app.”

DRAWDA is produced by Droichead Arts Centre and Love Drogheda BIDs with curators Dee Walsh and Brian Hegarty, funded by the Arts Council of Ireland under In the Open | Faoin Spéir Initiative,Louth County Council, Love Drogheda BIDS and Town and Village Accelerated Measures funding. It is supported by The d Hotel, Murtagh’s of Drogheda and Colour Trend Paints.

Working together with local, national and international artists, and mythologist Anthony Murphy, to deliver six murals based on some of the key figures from Irish Mythology who are rooted in the Boyne Valley Region, the project will be delivered across a number of strands,  which will draw on Drogheda’s significant rich heritage, mythology and architecture.

Voting for Best of 2022 closes on January 31st. Voting can be done via the Street Art Cities App in either the Apple or Google App store.  Let’s help get Drogheda on the Global Map and vote number 1 for Nina’s Étaín mural!