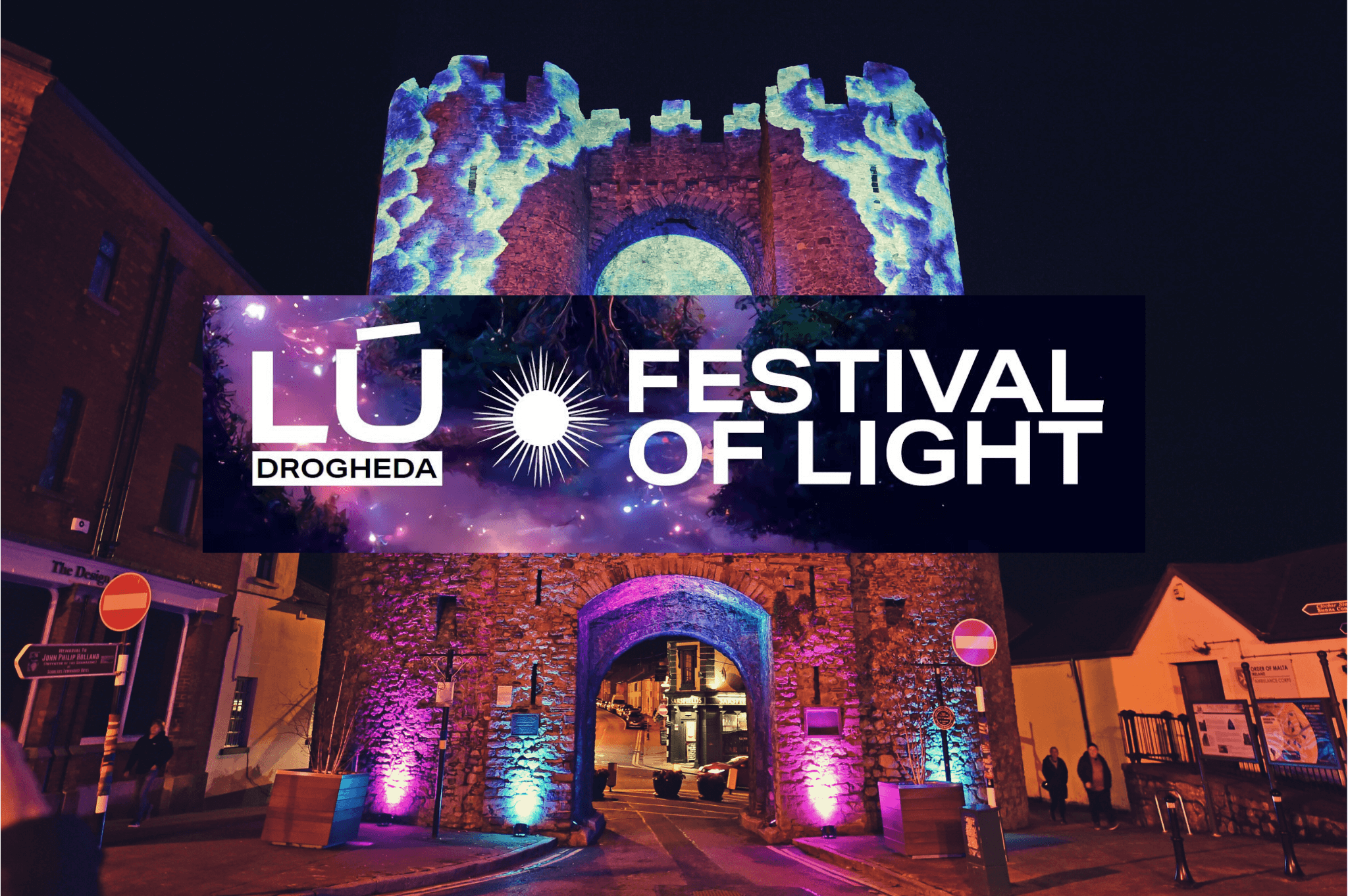 The Lú Festival of Light launched in Drogheda over the Halloween Mid-Term from 28th-31st October and the 2nd-5th November 2022. The festival brought stories, buildings and streets to life across an action-packed mid-term. The animation team took some myths and legends of Drogheda and the Boyne Valley area and combined them with local stories to project three unique pieces onto three landmark buildings in Drogheda town, The Old Abbey, St Peter’s Church, West Street and Laurence’s Gate. Adding to the festival atmosphere was a series of talented street performances including stilt-walkers, balloon modelers, circus performers, musicians, and fire artists as well as street food trucks and a series of special offers and events in bars, restaurants, and businesses throughout the town.

Many attended the Lú Festival of Light over the seven nights that the event took place. Due to weather warnings on Monday 31st October, Halloween Night, meant that the festival organizers followed protocol and called off the event for fears for attendee safety. Throughout the festival a buzz could be felt in the crowds as they stood and watched the large clocks countdown to the start of each show. In the final few seconds, crowds joined in the countdown and excitement built, reminiscent of a New Year’s Eve countdown. After each show a round of applause went up and many were left speechless.

The Lú Festival of Light was a joint undertaking by Louth County Council, Failte Ireland and Love Drogheda BIDs and demonstrates the level of what can be achieved when everyone works together. Failte Ireland have shown huge faith in the town as a destination for Irish Mythology and that enthusiasm was replicated by the local business community. Many businesses put on their own entertainment, special offers or stayed open late to make the most of the crowds attending the festival. Not only did the Lú Festival of Light showcase the mythological stories of the area and the town’s potential to host festivals of scale but Drogheda’s heritage took center stage as the projections lit up three major landmark buildings and showcased their beauty and history.

The team wanted to focus on bringing the Irish Mythology stories to life, and cementing Drogheda and the Ancient East as the focus point for where these stories took place. With Brú na Boinne so close to the town and the sailor-poet Amergin said to have landed on the banks of the Boyne, Drogheda is an ideal location for being the “home” of these mythological stories for Ireland. The Lú Festival of Light was a huge project in which to explore that potential.

St Peter’s Church, West Street was undoubtedly the hero piece of the festival. Depicting the story of Lugh, the Irish God of Fire, from whom County Louth gets its Irish name; the story of Fionn MacCumhaill and the Salmon of Knowledge which is said to have been caught from the Boyne River and interwoven with images of St Patrick bringing Christianity to Ireland and the construction of the church itself, the animation on St Peter’s Church was easily the most photographed and videoed of the entire festival.

The Old Abbey, which has recently undergone a huge transformation, showcased the gorgeous love story of Oengus and Caer, who spent some of their time in Newgrange in the form of two swans. An impressive aspect of this piece was that the “countdown” clock consisted of an interactive element; a Celtic statue was placed among the crowd and motion-control was used to move a series of falling feathers projected onto the Old Abbey in between shows.

Laurence’s Gate featured the stories of Boann the Goddess of the River Boyne, and how her walking counter-clockwise around a mystical well brought forth the waters within causing them to drown the Goddess and create both the Boyne River and the Milky Way. Snippets from the epic poem “The Song of Amergin” followed, with visuals of a boar, a bull, a fish swimming up and down Laurence’s Gates impressive towers, an eagle soaring through cliffs and a fire-skull head of a powerful god being some of the highlights.

The Love Drogheda BIDs team are delighted to have taken part in planning this festival, in what we view as a massive opportunity to show off Drogheda’s potential as a tourism destination but also as a home-place for the amazing Irish Mythology Stories that take place in its surrounding areas. We would like to thank every member of the team and everyone who took part in the festival for making it the massive success for the town that it was. We look forward to the Lú Festival of Light returning to Drogheda in 2023. Finally, we want to thank every person who visited the festival, who took photos, posted videos, gave positive feedback, and generally helped to spread the word about this incredible project.