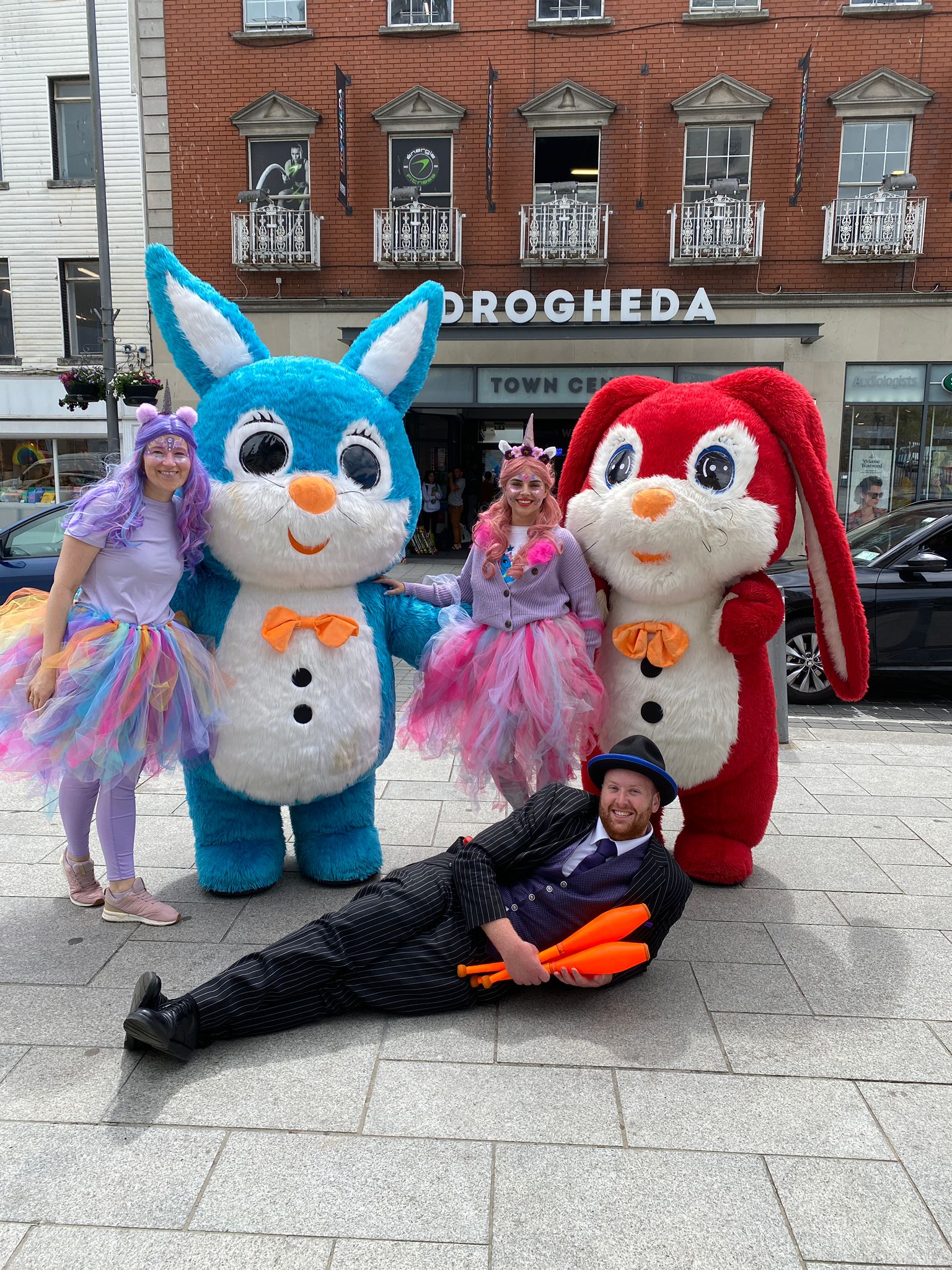 Visitors to Droghedas West Street on the Saturday afternoons of summer 2022 will have been delighted with the sense of colour, fun, and entertainment provided by a series of very special guests. From 12pm to 4pm Saturday afternoons on West Street have offered its visitors more than they bargained for. Love Drogheda BIDs have initiated our "Pop-Up Saturdays" project; a 10-week series of family friendly street entertainment, free to the public, and designed to promote a longer dwell time in Droghedas town centre as well as bring to the streets some life and fun.

The project brought together everything from Music, Dance, Circus performers, Magic, Fire, Face-Painting, Balloon-modelling, Giant Cuddle Bunnies and even Disney and Pixar characters into Droghedas town centre to meet and interact with the children and families of the town. Many local groups also featured such as the amazing Kid Kast, The Absurdist Pipe Band, The Drogheda Brass Band and local piper Darragh O Heiligh with guitarist Andrew Grafton.

On one particularly special Saturday afternoon Love Drogheda BIDs invited performers to celebrate a special "theme". May 28th, "World Play Day" drew large crowds into to the plaza on West Street where Love Drogheda was delighted to invite local Magician extraordinaire Martin the Magician to put on a show for the families. Face-Painting was provided in the Love Drogheda tent by the talented Jess Downey, who was a regular for the full 10-week program. To top it all off, we got a visit from a very special group of guests; the cast of Toy Story. Best friends Woodie, Buzz, Jessie and Mrs Potato Head added to the World Play Day celebrations. This particular Saturday afternoon encouraged the biggest crowds of the series with the plaza outside St Peters, West Street jam-packed with children and their families.

We joined forces with the Droichead Arts Centre on June 25th and hosted our "Mythical Midsummer" festival, celebrating the unique connection that Drogheda has with Mythology, and featuring the highly-successful "DRAWDA-Urban Art Trail"; a six-part, large-scale mural project with each Mural depicting a different mythological figure. Droichead Arts Centre hosted entertainment at the Old Abbey and Love Drogheda hosted magic, face-painting, balloon-modelling and cuddle bunny characters on West Street. The Cuddle Bunnies and Bears proved very popular and visited us many times throughout the summer.

Other groups that were involved in the Family Fun afternoons include the incredible Fire and Hoop performers Bríona and Eli who provided an explosive routine that was hugely impressive, Disney characters Cinderella (who sadly lost her shoe on the steps of St Peters Church), Mirabel and Bruno from Encanto, Face-painting by Jess Downey, Balloon-Modelling fairy Greta, Stilt-walkers Thomas and The Tall Gent (who brought the entertainment to new heights), Magician and comedian Ronaldo of the Fanzini Brothers, and the ever-entertaining Magician and Puppeteer, Colin Walker.

This 10-week "Pop-Up Saturdays" project would not have been possible without the help and support of many people. The Team at Love Drogheda BIDs would like to thank not only each and every performer (of which there were over 50) but also The Droichead Arts Centre, The Marcy Hotel, Cathal Thornton, The Drogheda Town Centre and the business community for their support. A very special thank you goes out to Fr Eugene Sweeney, Rocio and the rest of the staff and volunteers at St Peters Church, West Street for allowing us the time and space to make this project happen. We hope that the families of Drogheda enjoyed the street entertainment in summer 2022 and we look forward to bringing more projects like this to the town in the near future.