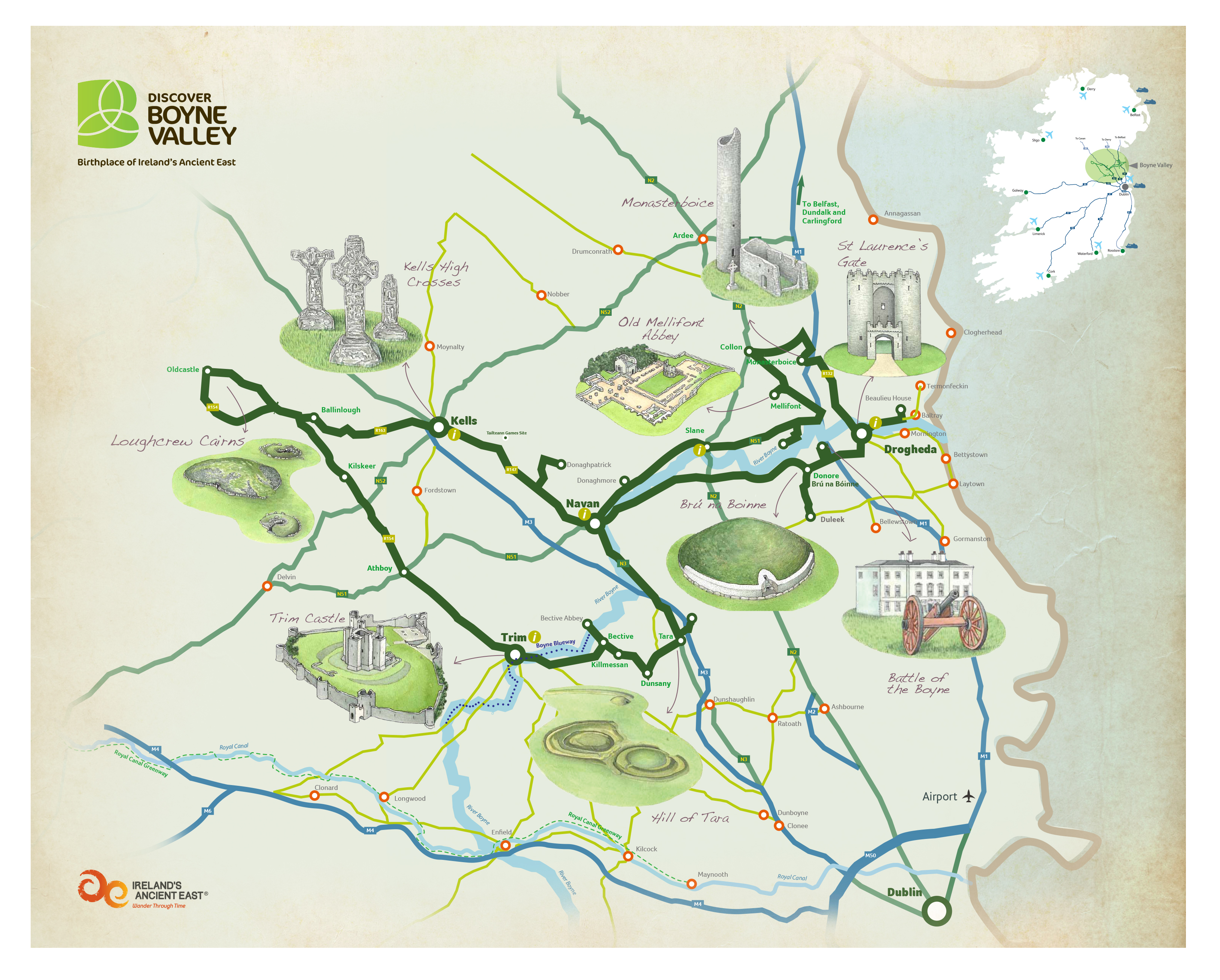 Drogheda is the gateway to the Boyne Valley Region. Our town is ideally located to be your base when exploring the many tourism offerings in our surrounding area. The Boyne Valley region is the Birthplace of Ireland’s Ancient East and has something for everyone, from lush greenways, beautiful waterways, cultural gems, outdoor adventures, and a thriving food and drink scene. One such day trip that is easy to complete from Drogheda is the Boyne Valley Drive. Admittedly, there is more to do and see on this drive then can be completed in one day, but why not select a couple of points of interest from the map below and see what fantastic experiences we have, right on our doorstep.

Starting from the heart of Drogheda’s medieval town, history-hunters will be delighted to visit the magnificent Laurence’s Gate, a barbican built in the 13th century and widely considered one of the finest of its kind in Europe. Art enthusiasts should take note of the modern art gallery, Highlanes Gallery, which is within sight of Laurence’s Gate.

Heading out from Drogheda town and you're but a short drive from a UNESCO World Heritage Site that predates the pyramids of Egypt, Brú na Bóinne. A new state-of-the-art immersive visitor experience at Brú na Bóinne focuses on the monuments of the Neolithic period, the pinnacle of passage tomb building tradition, as well as exploring the seasonal nature of Stone Age society. Newgrange, Knowth and Dowth make up the three passage tombs of Brú na Bóinne and its surroundings, and are home to significant examples of megalithic art. A new exhibit at Knowth explores the megalithic art of the Boyne Valley, and the story of the archaeologists who discovered it.

If, after your visit to Brú na Bóinne, you wish to see even more sites of historical significance, then you must visit the splendid ruins of Monasterboice. An early Christian settlement, Monasterboice is famous for its unmatched 10th century High Crosses and was an important site of learning and religion until the founding of the nearby Mellifont Abbey. Monasterboice was founded in the late 5th century by Saint Buithe, who died in 521, and in addition to it's High Crosses, houses two churches, built in the 14th century or later and an earlier round tower, whose exact date is unknown. The Monastery was burned down in 1097.

No visit along the Boyne Valley Drive would be complete without a trip to one of its most significant landscape sites, the Hill of Tara. The Hill of Tara is a site that has been in use for more than 5000 years as a place of burial and assembly. The area became famous as the legendary inauguration site of the ancient High Kings of Ireland. From its rolling slopes one can see all the way to the other great sites of the Boyne Valley, including Loughcrew Cairns, the Hill of Slane, Trim Castle and beyond. The Hill of Slane is the site from which St. Patrick lit the Paschal fire in defiance of the Pagan King of Tara. In later centuries, the Hill of Tara remained the focus of Gaelic identity and remains to this day the beating heart of Ireland. The area of the Hill of Tara is steeped in both history and mythology and is synonymous with Irish identity.

If the mythology surrounding some of the ancient sites of the Boyne Valley Drive have piqued your interest, then there is no better way of exploring this further than by returning to Drogheda and visiting the town's latest tourism offering; DRAWDA-Urban Art Trail. This is a series of six large-scale murals located around the town, which depict figures from our mythological past; The Dagda, The Morrigan, Étain, Amergín, Boann and Fionn and the Salmon of Knowledge. Each Mural has its own QR code which visitors can scan and listen to an audio clip telling the story of each figure. For more information on the artists and partners involved in DRAWDA, please visit the Droichead Arts Centre's website here. Maps of the Mural Trail are available at the Love Drogheda BIDS office, Meatmarket Lane, and from the Droichead Arts Centre, Stockwell Street. For more on the project, please visit our blog.

We have highlighted only a few of the many wonderful sites along the Boyne Valley Drive as an example of what is available within a short drive from Drogheda town. There are so many more places of interest such as the Battle of the Boyne Visitor Centre, Mellifont Abbey, Slane Castle and Distillery, and the Droichead Art Centre, to name a few. Whether you have visited these sites before or you are thinking of exploring the tourism available in your locality, the Boyne Valley Drive showcases some of the best visitor attractions in Ireland's Ancient East. For more details on each of the sites contained on the map, please visit the Discover Boyne Valley website here.